We often talk about ‘F**k It’ in the context of letting go – and that usually means letting go of our attachment to something that’s causing us pain. That might include an idea we have about something (eg. that we need to be successful at this or that)… or letting go of a relationship… or of a resistance to something..

It rarely, though, means literally letting go of something.

Because a woman in China, travelling home for Chinese New Year, and having to go through a security check at a train station (in Dongguan), didn’t want to let go of her handbag.

She tried to walk through security with it, but staff insisted that she put it into the x-ray machine.

But she really didn’t want to let go, even for one minute, of her handbag.

She didn’t.
And she climbed into the x-ray machine with it.

And this is the extraordinary photo of her in the machine, in high heels, with her bag, and saying ‘cheese’ for the camera – 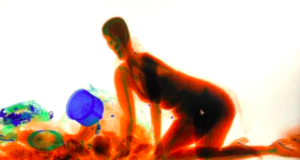 Let’s assume that there was something very valuable in her handbag (or the handbag itself was very valuable). Indeed, the news reports say that many people in China do carry large amounts of cash home with them at New Year.

And I could read a whole lot into this story and that wonderful image… that is says something about the new wealth in China and people’s desire to hang onto it; that there’s an other-wordly, almost alien quality to this image of her; that her crouched position is somehow reminiscent of the early stage of one of those evolution progression drawings, suggesting that such an action is un-evolved (or mid-evolution)…

But in the end, I’m left with this –
It was a rather F**k It thing to do wasn’t it?
(and potentially dangerous of course, so don’t try it at home or your nearest airport).

And a rare case of someone saying ‘F**k It’ and hanging on, rather than letting go.

Which reminds me that there are things, many things actually,
that I too would say ‘F**k It’ and fight to hang on to.